The Sanctuary of the Corona is a place of silence and meditation, suspended between heaven and earth, hidden in the heart of the Baldo rocks. Medieval documents attest that already around the year 1000 in the Baldo area lived some hermits linked to the Abbey of San Zeno in Verona and that at least from the second half of 1200 there was a monastery and a chapel dedicated to S. Maria di Montebaldo accessible through a narrow and dangerous path in the rock. During the sixteenth century, the two access staircases were built still visible: the widest, with 556 steps, which from the Spiazzi spring, later called "Fonte dell'Indipendenza", descended to the lime tree bridge, and the narrower one, of 234 steps. steps, carved into the rock along the original very narrow path that led from the bridge to the church. In 1625, the construction of a new and larger church 4 meters above the previous one began, which remained incorporated under the new presbytery. The works lasted for a few decades, reaching the roof in 1664 and finally ending in 1685. In the meantime, the access roads were rearranged and a hospice was built in a cavity in the mountain for the accommodation needs of increasingly numerous pilgrims. The Holy Place can be reached through two ways. You can start from the Spiazzi locality, which is located above the sanctuary, and it is the place to leave the car to reach the Sanctuary on foot in 15 minutes downhill, along the historic staircase that descends through the woods, or always along walk along the paved road where, along the hairpin bends, the stations of the fascinating bronze Way of the Cross follow one another. It is forbidden to go down to the Sanctuary with bicycles. The second way is the CAI path n. 73, also called the "Path of Hope", and which starts from Brentino Belluno. The route has a difference in height of about 600 meters and 2.5 km in length, and can be covered in about 1 hour and 30 meters of walking. The path climbs steeply along the side of Monte Cimo along steps, of varying height, carved into the rock. Along the path there are the stations of the Mysteries that make up the Rosary. Once you reach the Tiglio bridge, you go up the steps of the Via Matris Dolorosae which leads to the foot of the sanctuary, where seven aedicules invite you to reflect on some moments in Mary's life that are particularly full of sorrow for the fate of her Son. The locality of Brentino is not connected to the sanctuary by means of transport, therefore whoever climbs from the path must also descend on foot. It is advisable to have adequate footwear and a supply of water and food. 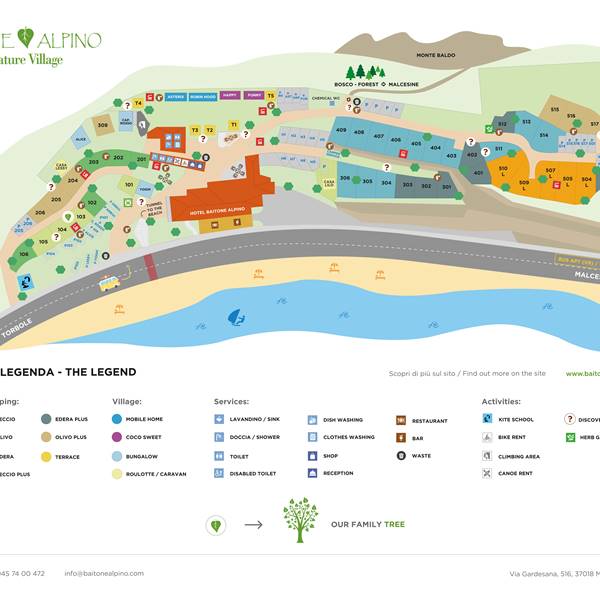